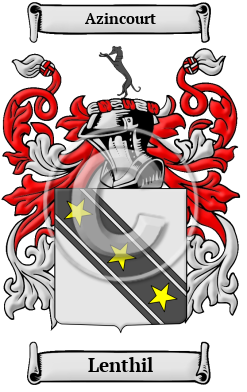 The origins of the Lenthil name lie with England's ancient Anglo-Saxon culture. It comes from when the family lived in the chapelry of Lenthall found in the parish of Aymestrey in the county of Hereford.

Early Origins of the Lenthil family

The surname Lenthil was first found in Herefordshire at Lenthall. However, later some of the family were found at Yelford-Hastings in Oxfordshire. "This parish, which originally belonged to the family of Hastings, was purchased by Mr. Speaker Lenthall, whose descendant, K. J. W. Lenthall, Esq., is the present lord of the manor." [1] The same gentleman was later found at Besselsleigh in Berkshire. "Sir Edmund Fettyplace sold [the manor of Besselsleigh], about 1620, to Wm. Lenthall, master of the rolls, and speaker of the house of commons in the Long parliament, from whom it has descended to Kyffin J. W. Lenthall, Esq. The old manor-house was pulled down about fifty years later: Cromwell, who was a frequent visitor, usually concealed himself in a room to which the only access was by a chair let down and drawn up with pulleys. Sir John Lenthall, son and heir of the speaker, and governor of Windsor Castle, was buried in the chancel of the church in 1681." [1]

Early History of the Lenthil family

This web page shows only a small excerpt of our Lenthil research. Another 95 words (7 lines of text) covering the years 1620, 1591, 1662, 1622 and 1681 are included under the topic Early Lenthil History in all our PDF Extended History products and printed products wherever possible.

Before the last few hundred years, the English language had no fast system of spelling rules. For that reason, spelling variations are commonly found in early Anglo-Saxon surnames. Over the years, many variations of the name Lenthil were recorded, including Lenthal, Lentall, Lenthall and others.

Another 40 words (3 lines of text) are included under the topic Early Lenthil Notables in all our PDF Extended History products and printed products wherever possible.

Migration of the Lenthil family

To escape oppression and starvation at that time, many English families left for the "open frontiers" of the New World with all its perceived opportunities. In droves people migrated to the many British colonies, those in North America in particular, paying high rates for passages in cramped, unsafe ships. Although many of the settlers did not make the long passage alive, those who did see the shores of North America perceived great opportunities before them. Many of the families that came from England went on to make essential contributions to the emerging nations of Canada and the United States. Research into various historical records revealed some of first members of the Lenthil family emigrate to North America: George Lentall settled in Virginia in 1637; Rowland Lentall settled in Nevis in 1663; Christopher Lentall settled in Philadelphia in 1749; Barbara Lentill settled in Virginia in 1650.