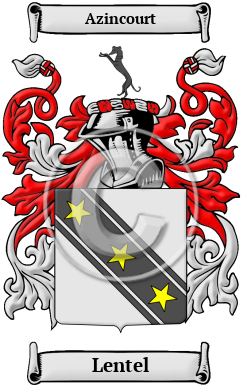 The roots of the Anglo-Saxon name Lentel come from when the family resided in the chapelry of Lenthall found in the parish of Aymestrey in the county of Hereford.

Early Origins of the Lentel family

The surname Lentel was first found in Herefordshire at Lenthall. However, later some of the family were found at Yelford-Hastings in Oxfordshire. "This parish, which originally belonged to the family of Hastings, was purchased by Mr. Speaker Lenthall, whose descendant, K. J. W. Lenthall, Esq., is the present lord of the manor." [1] The same gentleman was later found at Besselsleigh in Berkshire. "Sir Edmund Fettyplace sold [the manor of Besselsleigh], about 1620, to Wm. Lenthall, master of the rolls, and speaker of the house of commons in the Long parliament, from whom it has descended to Kyffin J. W. Lenthall, Esq. The old manor-house was pulled down about fifty years later: Cromwell, who was a frequent visitor, usually concealed himself in a room to which the only access was by a chair let down and drawn up with pulleys. Sir John Lenthall, son and heir of the speaker, and governor of Windsor Castle, was buried in the chancel of the church in 1681." [1]

Early History of the Lentel family

This web page shows only a small excerpt of our Lentel research. Another 95 words (7 lines of text) covering the years 1620, 1591, 1662, 1622 and 1681 are included under the topic Early Lentel History in all our PDF Extended History products and printed products wherever possible.

The English language only became standardized in the last few centuries; therefore, spelling variations are common among early Anglo-Saxon names. As the form of the English language changed, even the spelling of literate people's names evolved. Lentel has been recorded under many different variations, including Lenthal, Lentall, Lenthall and others.

Another 40 words (3 lines of text) are included under the topic Early Lentel Notables in all our PDF Extended History products and printed products wherever possible.

Lentel migration to the United States +

For many English families, the political and religious disarray that shrouded England made the far away New World an attractive prospect. On cramped disease-ridden ships, thousands migrated to those British colonies that would eventually become Canada and the United States. Those hardy settlers that survived the journey often went on to make important contributions to the emerging nations in which they landed. Analysis of immigration records indicates that some of the first North American immigrants bore the name Lentel or a variant listed above:

Lentel Settlers in United States in the 18th Century