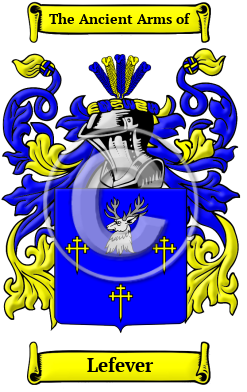 The surname Lefever is derived from the Old French word "fevre," which meant "a blacksmith," therefore it was originally an occupational name for a smith or a metal worker. While the patronymic and metronymic surnames, those derived from the name of the father and mother respectively, were the most common form of a hereditary surname in France, occupational surnames also emerged during the late Middle Ages.

Early Origins of the Lefever family

The surname Lefever was first found in Savoy (French: Savoie) in the Rhône-Alpes region of the French Alps, where this noble family held a family seat since ancient times.

Early History of the Lefever family

Notable in the family name at this time was Antoine Favre (d. 1626), Professor at the University of Valence; Jean Le Fèvre (1652-1706), a French astronomer and physicist; Tanneguy Lefebvre (1615-1672), French classical scholar; Etienne Favre was a Counsel at the Appeals Tribunal of Bresse where he had his noble status confirmed...
Another 51 words (4 lines of text) are included under the topic Early Lefever Notables in all our PDF Extended History products and printed products wherever possible.

In the United States, the name Lefever is the 12,797th most popular surname with an estimated 2,487 people with that name. [2]

Lefever migration to the United States +

Lefever Settlers in United States in the 17th Century

Lefever Settlers in United States in the 18th Century

Lefever Settlers in New Zealand in the 19th Century