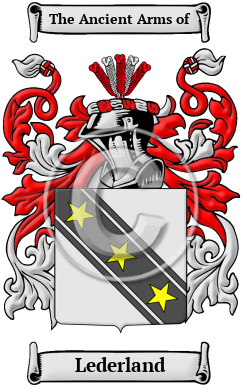 Early Origins of the Lederland family

The surname Lederland was first found in Lancashire where they held a family seat in this township in the parish of Sefton. Although early records are scant, it is surmised that this ancient fief was named Lederland, amongst neighboring Bootle, Walton, Newsham, Childwall, Wavertree, West Derby, Speke, Crosby and Maghull and appeared in the Domesday Book in 1086. Litherland or Lederland appeared as Down Litherland, held by Roger de Poitou, a Norman noble. Lither or Leder succeeded the original Norman settler on the estate, and later it became the Lordship of Litherland.

"Litherland was used as a surname. In 1246 Edith de Litherland complained that Yarwerth de Litherland had taken her cow; but he proved that she was his 'native' and that he seized the cow in lieu of her service. She was poor and had been abetted in the matter by Richard le Waleys and Henry de Standish. About 1320 the Henry de Litherland demised to Margaret his mother for life all his lands in Aughton, except his field of Stockbridge." [1]

Early History of the Lederland family

This web page shows only a small excerpt of our Lederland research. Another 93 words (7 lines of text) covering the years 1548 and 1513 are included under the topic Early Lederland History in all our PDF Extended History products and printed products wherever possible.

More information is included under the topic Early Lederland Notables in all our PDF Extended History products and printed products wherever possible.

Migration of the Lederland family

Some of the first settlers of this family name or some of its variants were: John Leatherland, who settled in Virginia in 1665.