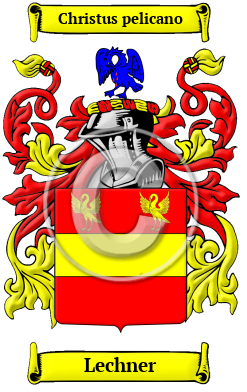 The distinguished surname Lechner emerged among the industrious people of Flanders, which was an important trading partner and political ally of Britain during the Middle Ages. As a result of the frequent commercial intercourse between the Flemish and English nations, many Flemish migrants settled in Britain. In early times, people were known by only a single name. However, as the population grew and people traveled further afield, it became increasingly necessary to assume an additional name to differentiate between bearers of the same personal name. The manner in which hereditary surnames arose is interesting. Local surnames are derived from where the original bearer lived, was born, or held land. Flemish surnames of this type frequently are prefixed by de la or de le, which mean of the or from the. The Lechner family originally lived in the settlement of Lashmars Hall in the county of Sussex or in a moor called Lechmere in the parish of Lechlade in Gloucestershire. The surname Lechner belongs to the category of habitation names, which are derived from pre-existing names for towns, villages, parishes, or farmsteads.

Early Origins of the Lechner family

The surname Lechner was first found in Worcestershire where they held a family seat as Lords of the Manor of Hanley. "A family of great antiquity, said to have migrated from the Low Countries, and to have received a grant of land called 'Lechmere's Field,' in Hanley, from William the Conqueror." [1] He was granted the Castle of Hanley which is now only traced by the castle moat. Adam de Lechmere succeeded from the first settler who arrived from the Lech, a tributary of the Rhine which departs from the main river at Wyke and running westward, falls into the Maes before Rotterdam in Holland. The castle was reduced during the 18th century, and the family settled at Lechmere's Place.

Early History of the Lechner family

This web page shows only a small excerpt of our Lechner research. Another 135 words (10 lines of text) covering the years 1290, 1727, 1613, 1701, 1675 and 1727 are included under the topic Early Lechner History in all our PDF Extended History products and printed products wherever possible.

Another 48 words (3 lines of text) are included under the topic Early Lechner Notables in all our PDF Extended History products and printed products wherever possible.

In the United States, the name Lechner is the 9,220th most popular surname with an estimated 2,487 people with that name. [2]

Lechner migration to the United States +

The records on immigrants and ships' passengers show a number of people bearing the name Lechner:

Lechner Settlers in United States in the 18th Century

Lechner Settlers in United States in the 19th Century