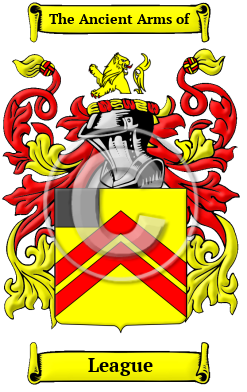 The root of the ancient Dalriadan-Scottish name League is a devotion to Christianity. The Gaelic form of the name is M'A'Lios, which is a shortened form of Mac Giolla Iosa, meaning on of the servant of Jesus. [1] Cleish Castle is a 16th-century tower house in Kinross-shire, Scotland, west of the hamlet of Cleish.

Early Origins of the League family

Early History of the League family

The translation of Gaelic names in the Middle Ages was not a task undertaken with great care. Records from that era show an enormous number of spelling variations, even in names referring to the same person. Over the years League has appeared as MacLeish, MacCleish, MacLise, MacLish, MacGillies, MacGleish, MacGillis, MacLeash and many more.

Notable amongst the Clan from early times was Robert M'Gleish, burgess of Irvine, 1686; and John M'Cleish, burgess, 1745. [2] Daniel MacLise (1806-1870), historical painter, was the son of Alexander McLeish, McLish, McClisse, or McLise, a Scottish highlander, once a private soldier in the Elgin fencibles, but at the time of the artist's birth engaged in tanning or shoemaking at Cork, where his regiment had been quartered in 1797. On 24 Dec. in that year Alexander McLish married Rebecca Buchanan, 'daughter of Mrs. Buchanan, Almshouse,' as she is described in the register of the presbyterian (now unitarian) church, Princes Street, Cork, where...
Another 208 words (15 lines of text) are included under the topic Early League Notables in all our PDF Extended History products and printed products wherever possible.

In the United States, the name League is the 14,850th most popular surname with an estimated 2,487 people with that name. [3]

League migration to the United States +

Many settled along the east coast of what would become the United States and Canada. As the American War of Independence broke out, those who remained loyal to the crown went north to Canada as United Empire Loyalists. The ancestors of all of these hardy Dalriadan-Scottish settlers began to recover their collective history in the 20th century with the advent of the vibrant culture fostered by highland games and Clan societies in North America. Highland games, clan societies, and other organizations generated much renewed interest in Scottish heritage in the 20th century. The League were among the earliest of the Scottish settlers as immigration passenger lists have shown:

League Settlers in United States in the 17th Century

League Settlers in United States in the 20th Century