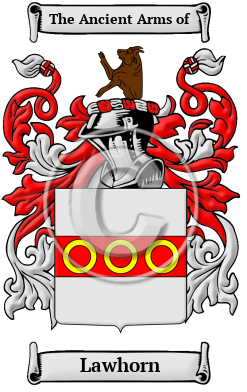 The founding heritage of the Lawhorn family is in the Anglo-Saxon culture that once dominated in Britain. The name Lawhorn comes from when one of the family worked as a person who worked as a lawyer. Occupational names that were derived from the common trades of the medieval era transcended European cultural and linguistic boundaries. The surnames of office, which include military, judicial, papal and other positions of authority, are widespread throughout Europe. Those who were involved in the military, or feudal armies, were given names such as the English surname Archer, the French name Chevalier and the German name Jeger, which means hunter. Names that were derived from judicial and papal titles, such as Bailiff, Squire and Abbott, are still commonly seen with the same surname spelling today.

Early Origins of the Lawhorn family

The surname Lawhorn was first found in Yorkshire, where the prominent Saxon landowner, Lagmann, was recorded in 1066. Lagmann held title to the thriving farming settlement of Wharram Percy in the 11th century. His sons, Alwold and Brictric Lageman, had settled on estates in Lincolnshire by 1066. During the reign of King John the family established themselves in Hampshire, where Hugo Lageman was registered in 1210. [1]

Early History of the Lawhorn family

The first dictionaries that appeared in the last few hundred years did much to standardize the English language. Before that time, spelling variations in names were a common occurrence. The language was changing, incorporating pieces of other languages, and the spelling of names changed with it. Lawhorn has been spelled many different ways, including Lawman, Laweman, Lawemon, Lawghman, Lagmann, Lageman, Lauman, Layamon and many more.

Another 25 words (2 lines of text) are included under the topic Early Lawhorn Notables in all our PDF Extended History products and printed products wherever possible.

In the United States, the name Lawhorn is the 4,596th most popular surname with an estimated 7,461 people with that name. [2]

Migration of the Lawhorn family

Thousands of English families in this era began to emigrate the New World in search of land and freedom from religious and political persecution. Although the passage was expensive and the ships were dark, crowded, and unsafe, those who made the voyage safely were rewarded with opportunities unavailable to them in their homeland. Research into passenger and immigration lists has revealed some of the very first Lawhorns to arrive in North America: Peter Lawman, who sailed to the West Indies in 1697; Stephen Lauman to Pennsylvania in 1733; and Martin Lauman to Pennsylvania in 1746.