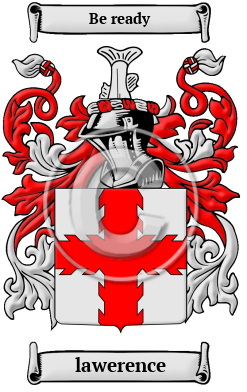 It was among those Anglo-Saxon tribes that once ruled over Britain that the name lawerence was formed. The name was derived from the name Lawrence. This name is in turn derived from the Latin name Laurentius, which literally means man from Laurentium, a town in Italy named for its laurels or bay trees. The popularity of this name in medieval Europe is due to the exploits of a saint who was martyred at Rome in the 3rd century.

Early Origins of the lawerence family

The surname lawerence was first found in Lancashire at Yealand-Redmayne, a township, in the parish of Warton, union of Lancaster, hundred of Lonsdale south of the Sands. "Yealand Hall, an ancient dwelling at Yealand-Storrs in the township, seems to have been possessed in the reign of Henry VIII. by the family of Lawrence, who held the manor of "Yeland-Redmayn" as of the manor of Warton." [1]

Early History of the lawerence family

Until the dictionary, an invention of only the last few hundred years, the English language lacked any comprehensive system of spelling rules. Consequently, spelling variations in names are frequently found in early Anglo-Saxon and later Anglo-Norman documents. One person's name was often spelled several different ways over a lifetime. The recorded variations of lawerence include Lawrence, Laurence, Lawerence, Lawrance and many more.

Notables of this surname at this time include: Thomas Laurence (1598-1657), an English churchman and academic, at the age of 16 he attended Balliol College, Oxford (1614); Sir John Lawrence (died 1692), an English merchant and politician, Lord...
Another 37 words (3 lines of text) are included under the topic Early lawerence Notables in all our PDF Extended History products and printed products wherever possible.

In the United States, the name lawerence is the 11,198th most popular surname with an estimated 2,487 people with that name. [2]

Migration of the lawerence family

Thousands of English families boarded ships sailing to the New World in the hope of escaping the unrest found in England at this time. Although the search for opportunity and freedom from persecution abroad took the lives of many because of the cramped conditions and unsanitary nature of the vessels, the opportunity perceived in the growing colonies of North America beckoned. Many of the settlers who survived the journey went on to make important contributions to the transplanted cultures of their adopted countries. The lawerence were among these contributors, for they have been located in early North American records: George and Elizabeth Lawrance, who settled in Virginia in 1641; Anne and John Lawrence settled in Virginia with their seven children in 1676; Ben, Edward, Elizabeth, J.R. John, Joseph, Lewis, Mary, Phillip, Thomas, and William Lawrence, all arrived in Philadelphia between 1840 and 1860..