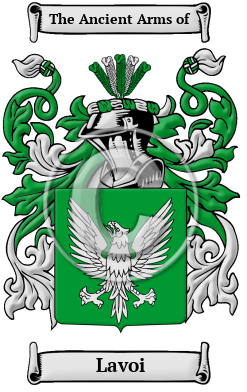 Early Origins of the Lavoi family

The surname Lavoi was first found in Lorraine, where ancestors of the bearers of this family name have lived since ancient times. This eminent family held estates and manors in the honor of the seigneurie of Lavoie in the department of La Meuse in the canton of Triaucourt in the arrondissement of Bar-le-Duc. This region traversed the border of Belgium and Holland, and frequently the French settlers in that area were known as Walloons. Since the border moved back and forth through the early centuries, it is difficult to establish at any given time whether this was actually French territory or Belgium. There are also records of this family having moved into neighbouring Holland, where they acquired estates. They also branched into Brittany, Liege, and Maine. In Brittany they held a family seat at Penhoet. The family also branched to D'Iseron in Forez.

Early History of the Lavoi family

This web page shows only a small excerpt of our Lavoi research. More information is included under the topic Early Lavoi History in all our PDF Extended History products and printed products wherever possible.

More information is included under the topic Early Lavoi Notables in all our PDF Extended History products and printed products wherever possible.

Migration of the Lavoi family

Some of the first settlers of this family name or some of its variants were: René De La Voye, son of René and Isabelle Bélanger, born in Rouen, France (1628), who married Anne Godin in Québec city on the 19th April 1656.