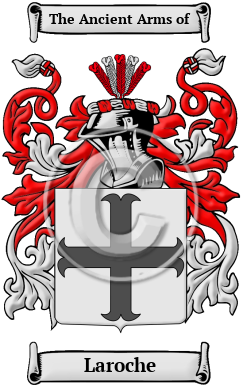 From the beautiful region of Burgundy (French: Bourgogne), in France, comes the distinguished surname Laroche. Laroche is a topographic surname, a type of hereditary surname, which was given to a person who resided near a physical feature such as a hill, stream, church, or type of tree. Habitation names form the other broad category of surnames that were derived from place-names. They were derived from pre-existing names for towns, villages, parishes, or farmsteads. Other local names are derived from the names of houses, manors, estates, regions, and entire counties. As a general rule, the greater the distance between an individual and their homeland, the larger the territory they were named after. For example, a person who only moved to another parish would be known by the name of their original village, while people who migrated to a different country were often known by the name of a region or country from which they came. The name Laroche is derived from the French word "roche," meaning "rock," and indicates that the original bearer was distinguished by residence near a prominent rock.

Early Origins of the Laroche family

The surname Laroche was first found in Burgundy (French: Bourgogne), an administrative and historical region of east-central France, where this ancient family was recognized as one of the original families of the region. Saint Roch or Rocco (c. 1295-1327) was a Catholic saint, a confessor. He is a patron saint of dogs, falsely accused people, and bachelors. He may have been born c. 1348 and died c. 1376.

The house of des Roches de Chassay was cited since 1275. The family des Roches de Chassay had their nobility confirmed in 1663, after heroic service at the siege of Hesdin. The county of Bigorre, in Burgundy, was the cradle of the house de la Roche-Fontenille, distinguished by their alliances and who occupied in the twelfth century a high rank in the nobility of the province. Two of their members took part in the first crusade of Saint-Louis, but their affiliation was not established until Sanche de la Roche, lord of Fontenille, deceased in the year 1318.

Jean Desroches, born in 1621, travelled from France to Canada in the 17th century. After arriving in Quebec he married Françoise Gode, born in 1636, daughter of Nicolas and Françoise (née Gadois), at Montreal on 18th November 1647. They remained together in Quebec until Jean's death on 23rd August 1684. [1]

Early History of the Laroche family

Notable amongst the family at this time was Estienne de La Roche (1470-1530), a French mathematician; Anne de La Roche-Guilhem (1644-1710), a French writer; and Hippolyte de la Roche, also know as Paul, (1797-1856), a...
Another 34 words (2 lines of text) are included under the topic Early Laroche Notables in all our PDF Extended History products and printed products wherever possible.

Laroche migration to the United States +

Laroche Settlers in United States in the 18th Century

Laroche Settlers in United States in the 19th Century

Laroche Settlers in Canada in the 17th Century

Laroche Settlers in Canada in the 18th Century

Laroche Settlers in Australia in the 19th Century

Historic Events for the Laroche family +