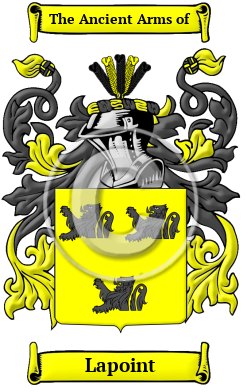 Early Origins of the Lapoint family

The surname Lapoint was first found in Périgord where they held a family seat in the seigneure of Tarn in the arrondissement of Lavaur, near Gaillac from early times.

By the 13th century they had branched eastward to Franche-Comté, Bourgogne and Champagne where they held estates. They flourished on their estates for several centuries intermarrying with other distinguished families of the area.

Nicolas Lapointe, son of Innocent and Vincente (née Reine), travelled from France to Canada in the 17th century. After arriving in Quebec he married Madeleine Despres, daughter of François and Madeleine, at Sainte-Famille-de-l'île-d'Orléans on 15th September 1670. Nicolas passed away on 10th December 1700 and was buried at Saint-Jean-de-l'île-d'Orléans. [1]

Early History of the Lapoint family

This web page shows only a small excerpt of our Lapoint research. More information is included under the topic Early Lapoint History in all our PDF Extended History products and printed products wherever possible.

More information is included under the topic Early Lapoint Notables in all our PDF Extended History products and printed products wherever possible.

In the United States, the name Lapoint is the 9,947th most popular surname with an estimated 2,487 people with that name. [2]

Migration of the Lapoint family