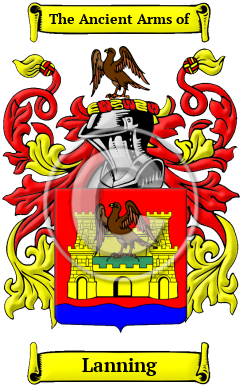 The illustrious surname Lanning is classified as a habitation surname, which was originally derived from a place-name, and is one form of surname belonging to a broader group called hereditary surnames. Habitation names were derived from pre-existing names for towns, villages, parishes, or farmsteads. Topographic names, form the other broad category of surnames that was given to a person who resided near a physical feature such as a hill, stream, church, or type of tree.

Other local names are derived from the names of houses, manors, estates, regions, and entire counties. As a general rule, the greater the distance between an individual and their homeland, the larger the territory they were named after. For example, a person who only moved to another parish would be known by the name of their original village, while people who migrated to a different country were often known by the name of a region or country from which they came. Lanning is a place-name from in Lanyon, in Cornwall. This makes it a habitational name, which is a type of and is derived from an already existing place-name. There is little doubt that this family had their origin in Brittany; however, the Cornish place-name was in place long before this family came to England. However, it is quite possible that the place-name has similar roots in both Brittany and Cornwall, as the Cornish and Breton languages are quite similar.

Early Origins of the Lanning family

The surname Lanning was first found in Cornwall where they settled in Lanyon. They entered England with Queen Isabella, King Edward II's bride, from Brittany where they also held the lands of Lanyon. Another source claims that the name was in fact Norman having derived from the town of Lannion in Brittany. [1] In this case, they must have settled during the time of Edward II. Their estate was also named Lanyon.

Early History of the Lanning family

This web page shows only a small excerpt of our Lanning research. Another 156 words (11 lines of text) covering the years 176 and 1765 are included under the topic Early Lanning History in all our PDF Extended History products and printed products wherever possible.

More information is included under the topic Early Lanning Notables in all our PDF Extended History products and printed products wherever possible.

In the United States, the name Lanning is the 4,554th most popular surname with an estimated 7,461 people with that name. [3]

Lanning migration to the United States +

Some of the first immigrants to cross the Atlantic and come to North America carried the name Lanning, or a variant listed above:

Lanning Settlers in United States in the 19th Century

Lanning Settlers in Australia in the 19th Century

Lanning Settlers in New Zealand in the 19th Century