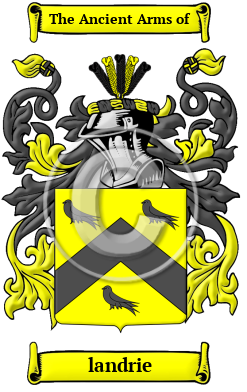 Early Origins of the landrie family

Although their first mention was in Lorraine, they branched north to Artois, south to Lyonnais and Bourgogne. One branch moved west into Brittany (French: Bretagne). The main stem of the family, however, were elevated to the nobility as Barons de Landres and the Comtes de Briey, Barons de Landres. Another branch of the family went eastward over the border into Luxembourg. The family flourished until the French Revolution in 1789 when most of the estates of this prestigious family were lost.

Guillaume Landry, born in 1626, son of Mathurin and Damiane (née Desavin), travelled from Perche, France and settled at île d'Orléans, Quebec on 2nd April 1656. He married Gabrielle Barre in Quebec on 14th October 1659. Gabrielle passed away in 1688 and Guillaume died in Sainte-Famille on 8th January 1689. [1]

Early History of the landrie family

This web page shows only a small excerpt of our landrie research. Another 23 words (2 lines of text) covering the years 1330 and 1404 are included under the topic Early landrie History in all our PDF Extended History products and printed products wherever possible.

Spelling variations of this family name include: Landry, Landres, Landre, Landrey, Landrie and others.

Notable in the family name was Geoffrey IV de la Tour Landry (c. 1330-1404), French nobleman from Anjou who fought in the Hundred Years War. He wrote Livre pour l'enseignement de ses filles ("The Book...
Another 35 words (2 lines of text) are included under the topic Early landrie Notables in all our PDF Extended History products and printed products wherever possible.

landrie Settlers in Canada in the 18th Century