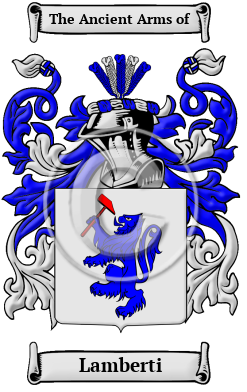 The Lamberti surname is patronymic in origin, meaning that it is derived from the first name of a father or ancestor of the original bearer, and in this case means "son of Lambert." The name itself can be ultimately traced to the Germanic elements "landa-," meaning "realm" or "estate," and "berhta," for "famous," or "illustrious."

Early Origins of the Lamberti family

The surname Lamberti was first found in Emilia-Romagna.

Early History of the Lamberti family

This web page shows only a small excerpt of our Lamberti research. Another 84 words (6 lines of text) covering the years 1024, 1370, 1451, 1653 and 1721 are included under the topic Early Lamberti History in all our PDF Extended History products and printed products wherever possible.

Spelling variations of this family name include: Lamberti, Lamberto, Lamperti, Lambertoni, Lambertazzi, Lambertenghi and many more.

More information is included under the topic Early Lamberti Notables in all our PDF Extended History products and printed products wherever possible.

Lamberti migration to the United States +

Lamberti Settlers in United States in the 18th Century

Lamberti Settlers in United States in the 19th Century