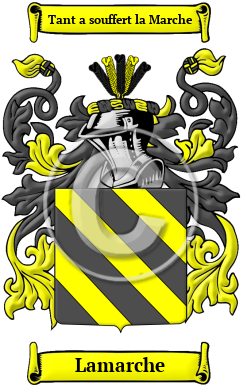 The prestigious surname Lamarche originated in the enchanting region of Lorraine, in France and is derived from the Old French word "marché," meaning "market." Presumably, the first to bear this surname would have lived or worked in such a place. As such, Lamarche is classed as a topographic surname, a form of hereditary surname created from a the word for a physical feature such as a hill, stream, church, or type of tree.

Early Origins of the Lamarche family

The surname Lamarche was first found in Lorraine, where this notable family has held a family seat since ancient times.

Early History of the Lamarche family

Another 37 words (3 lines of text) are included under the topic Early Lamarche Notables in all our PDF Extended History products and printed products wherever possible.

Lamarche migration to the United States +

Lamarche Settlers in United States in the 18th Century

Lamarche Settlers in United States in the 19th Century

Lamarche Settlers in United States in the 20th Century

Lamarche Settlers in Canada in the 17th Century

Lamarche Settlers in Canada in the 18th Century

Lamarche Settlers in Canada in the 20th Century