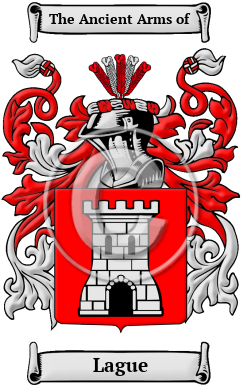 The surname Lague is a patronymic name; it is derived from the given name Adigari, a Germanic personal name. It means "noble spear." Such militaristic names were quite popular in the Middle Ages, which was an era of almost permanent warfare in Europe. The formulation of the surname started as L'ardigari, which was shortened and corrupted over time to the current version of the name.

Early Origins of the Lague family

The surname Lague was first found in Dauphiny (French: Dauphiné or Dauphiné Viennois), a former province in southeastern France, where this impressive family held a family seat since ancient times.

Early History of the Lague family

More information is included under the topic Early Lague Notables in all our PDF Extended History products and printed products wherever possible.

Lague migration to the United States +

Lague Settlers in United States in the 19th Century

Lague Settlers in Australia in the 19th Century