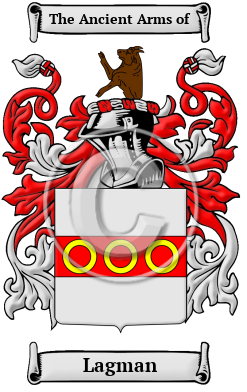 The name Lagman finds its origins with the ancient Anglo-Saxons of England. It was given to one who worked as a person who worked as a lawyer. Occupational names that were derived from the common trades of the medieval era transcended European cultural and linguistic boundaries. The surnames of office, which include military, judicial, papal and other positions of authority, are widespread throughout Europe. Those who were involved in the military, or feudal armies, were given names such as the English surname Archer, the French name Chevalier and the German name Jeger, which means hunter. Names that were derived from judicial and papal titles, such as Bailiff, Squire and Abbott, are still commonly seen with the same surname spelling today.

Early Origins of the Lagman family

The surname Lagman was first found in Yorkshire, where the prominent Saxon landowner, Lagmann, was recorded in 1066. Lagmann held title to the thriving farming settlement of Wharram Percy in the 11th century. His sons, Alwold and Brictric Lageman, had settled on estates in Lincolnshire by 1066. During the reign of King John the family established themselves in Hampshire, where Hugo Lageman was registered in 1210. [1]

Early History of the Lagman family

The English language only became standardized in the last few centuries; therefore, spelling variations are common among early Anglo-Saxon names. As the form of the English language changed, even the spelling of literate people's names evolved. Lagman has been recorded under many different variations, including Lawman, Laweman, Lawemon, Lawghman, Lagmann, Lageman, Lauman, Layamon and many more.

Another 25 words (2 lines of text) are included under the topic Early Lagman Notables in all our PDF Extended History products and printed products wherever possible.

Migration of the Lagman family

For many English families, the political and religious disarray that shrouded England made the far away New World an attractive prospect. On cramped disease-ridden ships, thousands migrated to those British colonies that would eventually become Canada and the United States. Those hardy settlers that survived the journey often went on to make important contributions to the emerging nations in which they landed. Analysis of immigration records indicates that some of the first North American immigrants bore the name Lagman or a variant listed above: Peter Lawman, who sailed to the West Indies in 1697; Stephen Lauman to Pennsylvania in 1733; and Martin Lauman to Pennsylvania in 1746.