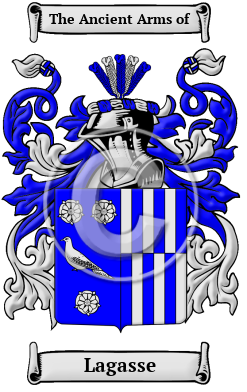 Early Origins of the Lagasse family

The surname Lagasse was first found in Normandy (French: Normandie), the former Duchy of Normandy.

The name can also be traced back to the region of Picardy (French: Picardie). Prominent in early times was Arnaud de Gachon, a lawyer at the Bordeaux parliament during the sixteenth century.

Early History of the Lagasse family

This web page shows only a small excerpt of our Lagasse research. More information is included under the topic Early Lagasse History in all our PDF Extended History products and printed products wherever possible.

Notable amongst the family in this period was Jacques Gaches, who was son of Pierre, a merchant born in 1523 and one of the artisans at the introduction of the Reform in Castres, consul of Castres in 1563 and first consul in 1585. Jacques was born in Castres in 1552 and became consul of the city in 1596 and again in 1604. Raymond Gaches was a pastor in the seventeenth century; Antoine-Hyppolite Gachet, born in Bordeaux in 1798, was a surgeon. The Gache family was known for three brothers who were renowned as painters in Nantes. Vincent...
Another 96 words (7 lines of text) are included under the topic Early Lagasse Notables in all our PDF Extended History products and printed products wherever possible.

In the United States, the name Lagasse is the 8,280th most popular surname with an estimated 2,487 people with that name. [1]

Lagasse migration to the United States +

Lagasse Settlers in United States in the 19th Century

Lagasse Settlers in United States in the 20th Century

Lagasse Settlers in Canada in the 20th Century