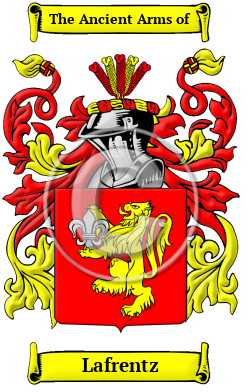 From the historical and enchanting region of France emerged a multitude of noble families, including the distinguished Lafrentz family. Originally, the people of this region went by one (personal) name. Surnames evolved during the Middle Ages when people began to assume an extra name to avoid confusion and to further identify themselves. These names then began to be "fixed" or hereditary. One of the types of names adopted as surnames, were habitational names; those derived from place names. The Lafrentz surname was likely first used by someone who held lands belonging to the French king, or perhaps for someone from the Île de France. A habitational name was often used for someone who had moved away from the place after which they were named. This name was sometimes used by soldiers in the feudal period. In French Canada, it was used as secondary "dit" name.

Early Origins of the Lafrentz family

The surname Lafrentz was first found in Picardy (French: Picardie) in northern France, where this celebrated family held a family seat since ancient times.

One of the noble branches of the family originates from Jehan La France and a distinctive member of this branch was the Attorney of the King at the Bailliage (district government) of Orléans in 1378. The family remained at Montech during the 1400's and Pierre of Montech is recorded as staying at Montauban around 1500. In 1570, Pierre was a Consul and then in 1596 he was promoted to 1st consul. Jean, Attorney for the King in the Chamber of Edicts of Castres in 1640, was the remaining member of the branch of the France Mandoul family and in 1651, he was granted the title of Lord of Mandoul.

By 1721, this noble family had branched to Béarn, Gascogne, Périgord and Comtat. As a result of their prominent position in society, the family formed many alliances with other powerful families of the times and in this way, the family acquired several titles and lands as dowries. The Béarn family of France possessed the seigniory of Benejac and of Incamps. However, this branch took the name of Vignau after an alliance with the Vignau family of Biaznos.

Jacques Lafrance, born in 1678, son of Jacques and Marie, travelled from France to Canada in the 17th century. After arriving in the Canadian province of Quebec he married Marie-Louise Alary, born in 1686, daughter of René and Louise, on 21st November 1712. They remained together in Quebec until Jacques passed away on 24th December 1750. Marie-Louise passed away on 18th July 1754. [1]

Early History of the Lafrentz family

More information is included under the topic Early Lafrentz Notables in all our PDF Extended History products and printed products wherever possible.

Migration of the Lafrentz family

Some of the first settlers of this family name or some of its variants were: John France, who settled in Virginia in 1651; Pierre La France, a French soldier on record in Quebec in 1665; Francois Lafrance, who arrived in Montreal in 1712.