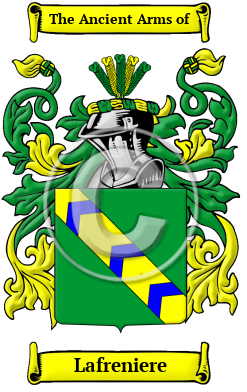 Noble surnames, such as Lafreniere, evoke images of the ancient homeland of the French people. The original bearer of the name Lafreniere, which is a local surname, once lived, held land, or was born in the beautiful region of Bourgoigne. In France, hereditary surnames were adopted according to fairly general rules and during the late Middle Ages, names that were derived from localities became increasingly widespread. Local names originally denoted the proprietorship of the village or estate. The Lafreniere family originally lived in the village of Fresne, in the province of Bourgoigne.

Early Origins of the Lafreniere family

The surname Lafreniere was first found in Burgundy (French: Bourgogne), an administrative and historical region of east-central France, where the family held a family seat in early times.

This family can be traced back to Thibaut, the lord of Fresnes, who was in the service of the duke of Burgundy with eight horsemen, in 1358. The members of this family also settled in other regions of France. One branch was formed in Fresnières, a village in the department of Oise, in the district of Compiègne, in Picardy.

Some members of the different family branches became prominent through their contributions to their respective communities. Claude de Fresne was the lord of Fresne and of Fleurey, in 1472. Among his descendents were: Étienne, a knight of Malte, the commander of Vaufranche, in Berry, during the 16th century; Chrétien, the captain of one hundred men-at-arms, who was killed during the battle at Saint-Quintin; François, the captain of Montbard; another François, a battle marshal in 1652, a captain of the Château of Montreal; and René, a sea captain, who was married in 1689. The family became even more prominent through alliances with other important families of the day, such as the Thiron, the Languet, the Chalon, the Viesse and the la Loge families.

Early History of the Lafreniere family

This web page shows only a small excerpt of our Lafreniere research. More information is included under the topic Early Lafreniere History in all our PDF Extended History products and printed products wherever possible.

Another 27 words (2 lines of text) are included under the topic Early Lafreniere Notables in all our PDF Extended History products and printed products wherever possible.

Lafreniere migration to the United States +

Lafreniere Settlers in United States in the 18th Century

Lafreniere Settlers in United States in the 20th Century