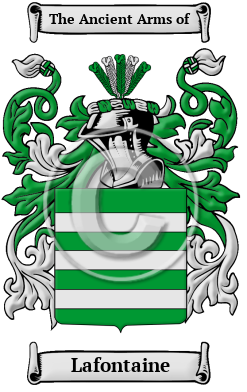 The French region of Savoie is the ancestral homeland of the prestigious surname Lafontaine. The name Lafontaine is derived from the Old French word "fontaine," which means "fountain," and as a name it no doubt originally served as a mark of recognition for someone who lived near such a landmark. As such, Lafontaine is classed as a topographic surname.

Early Origins of the Lafontaine family

The surname Lafontaine was first found in Savoy (French: Savoie) in the Rhône-Alpes region of the French Alps, where this renowned family has held a family seat since ancient times.

Early History of the Lafontaine family

Notable in the family name at this time was Pierre Fontaine (c. 1390-1450), a French composer and singer, who served in the chapel of Philip the Bold, Duke of Burgundy; François Lafontaine , Lord of Mézeyrac during the 1600's; Jean de La Fontaine (1621-1695), a French poet and man of letters, considered one of the great French classical authors; Jean Desfontaines (c. 1658-1752), a French Baroque...
Another 65 words (5 lines of text) are included under the topic Early Lafontaine Notables in all our PDF Extended History products and printed products wherever possible.

Lafontaine migration to the United States +

Lafontaine Settlers in United States in the 18th Century

Lafontaine Settlers in United States in the 19th Century

Lafontaine Settlers in Canada in the 17th Century

Lafontaine Settlers in Canada in the 18th Century