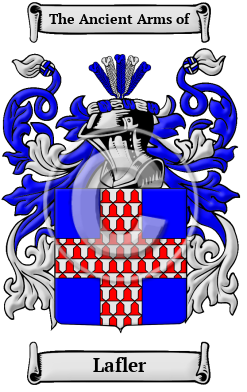 The name Lafler has a long French heritage that first began in the northern region of Normandy. The name is derived from when the family lived in Normandy, in the village of De Flers.

Early Origins of the Lafler family

The surname Lafler was first found in Normandy (French: Normandie), the former Duchy of Normandy, where the family was established in early times.

One branch of the family established a seigniory in Fleurent, Champagne, for De Braux. The branch Lafleur established a seigniory in Brittany in 1696 for Montlouis. The family became more prominent through alliances with other important families. Antoinette de Pellevé de Flers, the heiress of the county of Flers upon the death of her brother, married Philippe-René, the lord of Villebadin, in 1717. Hyacinthe, the marquis of Lezeau in 1803, reclaimed the title of marquis of Flers, which was conserved by his descendants. [1]

Jean Lafleur, born in 1663, son of Pierre and Françoise (née Claude), settled in Trois-Rivières, Quebec in the 17th century. He married Jeanne Chebaudier, daughter of Jean and Marie (née Mercier), on 7th January 1687. [2]

Early History of the Lafler family

This web page shows only a small excerpt of our Lafler research. Another 40 words (3 lines of text) covering the years 1598, 1794, 1872 and 1927 are included under the topic Early Lafler History in all our PDF Extended History products and printed products wherever possible.

History has changed the spelling of most surnames. During the early development of the French language in the Middle Ages, a person gave his version of his name, phonetically, to a scribe, a priest, or a recorder. Some variables were adopted by different branches of the family name. Hence, there spelling variations of the name Lafler, some of which include Lafleur, Lafleure, Fleur, Fleure, Flers, Leflers, de Flers, de Fleur, de Fleure, Desfleurs, Fleureau, Fleureaux, Fleurant, Fleurand, Florida and many more.

Another 35 words (2 lines of text) are included under the topic Early Lafler Notables in all our PDF Extended History products and printed products wherever possible.

Migration of the Lafler family

In 1643, 109 years after the first landings by Cartier, there were only about 300 people in Quebec, in 1663 there were only 500, 2,000 migrants arrived during the next decade. Early marriage was desperately encouraged amongst the immigrants. Youths of 18 took fourteen-year-old girls for their wives. The fur trade was developed and attracted migrants, both noble and commoner from France. 15,000 explorers left Montreal in the late 17th and 18th centuries. Migration from France to New France or Quebec as it was now more popularly called, continued from France until it fell in 1759. By 1675, there were 7000 French in Quebec. By the same year the Acadian presence in Nova Scotia, New Brunswick and Prince Edward Island had reached 500. In 1755, 10,000 French Acadians refused to take an oath of allegiance to England and were deported to Louisiana. Meanwhile, in Quebec, the French race flourished, founding in Lower Canada, one of the two great solitudes which became Canada. Many distinguished contributions have been made by members of this family name Lafler. It has been prominent in the arts, religion, politics and culture in France and New France. Amongst the settlers in North America with this distinguished name Lafler were Jean Fleurant, who arrived in Quebec in 1656; M. La Fleur, who was living in Fort Louis de la Mobile in Louisiana, in the year 1711; M. La Fleur, a wagon maker, who was living in New Orleans in 1725.