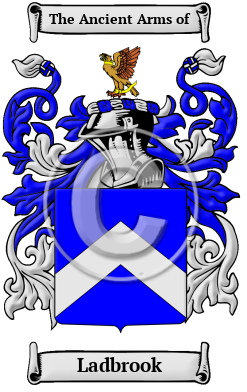 The Anglo-Saxon name Ladbrook was established when the family resided in the village of Ladbrooke. Ladbrook is a habitation name from the broad category of surnames that were derived from place-names. However, one source claims that it may have originally been derived from a personal name as in "it was the daughter of Lodbrok the Dane who wove the famous Raven Standard, which always announced victory to the Scandinavian marauders by fluttering like a living bird." [1]

Early Origins of the Ladbrook family

The surname Ladbrook was first found in Warwickshire, at Ladbroke, a village and civil parish about 2 miles (3.2 km) south of Southam in the hundred of Knightlow. [2] This ancient Saxon village dates back to 998 when it was first listed as Hlodbroc. By the time of the Domesday Book of 1086, the place name was listed as Lodbroc. [3] Literally the place name probably means "brook used for divination," from the Old English words "hlod" + "broc." [4] Ladbroke Hall is a country house built late in the 17th century now converted into residential apartments.

Early History of the Ladbrook family

The English language only became standardized in the last few centuries; therefore,spelling variations are common among early Anglo-Saxon names. As the form of the English language changed, even the spelling of literate people's names evolved. Ladbrook has been recorded under many different variations, including Ladbrook, Ladbrooke, Ladbroke, Lodbroc, Lodbrooke, Lodbrook, Lathbrook and many more.

More information is included under the topic Early Ladbrook Notables in all our PDF Extended History products and printed products wherever possible.

Ladbrook Settlers in Australia in the 19th Century

Ladbrook Settlers in New Zealand in the 19th Century