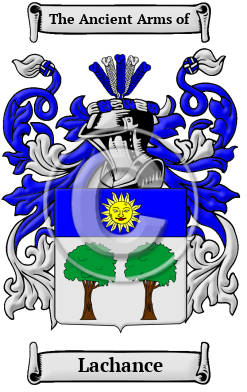 From the historical and enchanting region of France emerged a multitude of notable family names, including that of the distinguished Lachance family. Originally, the people in this region went by one (personal) name. Surnames evolved during the Middle Ages when people began to assume an extra name to avoid confusion and to further identify themselves. These names then began to become "fixed" or hereditary between the generations. One of the types of names adopted as surnames were those derived from nicknames. Nickname surnames were derived from an eke-name, or added name, and generally reflected some physical characteristics or other attribute of the first person that used the name. The Lachance surname derives from the Old French word "cheaunce," which means "chance," and as such was likely originally a nickname for a gambler, for a lucky person, or ironically, for an unlucky person.

Early Origins of the Lachance family

The surname Lachance was first found in Chanceaux, in Touraine. Many of the family settled in Devonshire, England from the time of the Conquest. "In 1086 Milton, with Lideton, Devon, belonged to Tavistock Abbey. Goisfrid then held them, from whom descended Reginald de Lideton, who 1165 held two fees of Tavistock." [1]

Early History of the Lachance family

Lachance migration to the United States +

Lachance Settlers in United States in the 19th Century

Lachance Settlers in Canada in the 17th Century