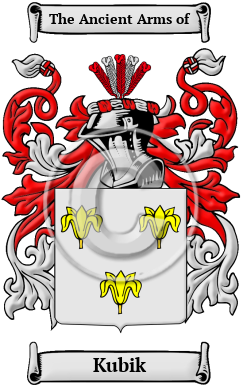 The Kubik surname is comes from the root Kuba, which is a short form of the first name Jakub.

Early Origins of the Kubik family

The surname Kubik was first found in Polesie, the largest province of Poland. It is inhabited by Ruthenians, called Polesians, of Ukrainian descent. The main towns are those of Brest Litovsk, Pinsk, Kobryn, Kamenets, Litovsk, and Luninets. It was in this province that the renowned Radziwills and Sapiehas held their vast estates. Wolczyn was the seat of the Czartoryski family. The surname became noted for its many branches in the region, each house acquiring a status and influence which was envied by the princes of the region. In their later history the name became a power unto themselves and were elevated to the ranks of nobility as they grew into this most influential family.

Early History of the Kubik family

This web page shows only a small excerpt of our Kubik research. Another 83 words (6 lines of text) covering the years 1833, 1790 and 1809 are included under the topic Early Kubik History in all our PDF Extended History products and printed products wherever possible.

Prominent among those of the name Kubik in this period were Kubicki Jakób, a Polish building master, educated in Italy, sponsored by Stanislaw August; he devoted himself to his profession with all his love. Lots of buildings in Poland were erected...
Another 40 words (3 lines of text) are included under the topic Early Kubik Notables in all our PDF Extended History products and printed products wherever possible.

In the United States, the name Kubik is the 10,476th most popular surname with an estimated 2,487 people with that name. [1]

Kubik migration to the United States +

Kubik Settlers in United States in the 19th Century