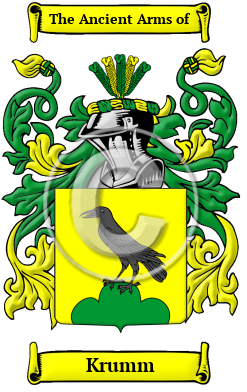 Early Origins of the Krumm family

The surname Krumm was first found in Silesia and Bohemia, where the name contributed greatly to the development of an emerging nation and would later play a large role in the tribal and national conflicts of the area. The name Kroh or Krohe was common in mediaeval Germany, as it meant "grau" (in English, "grey"). Chronicles mention Dietrich Kro of Prague in 1411. The endings "-er," "-man," "-meier," "-mayer," and "-au" were often quite interchangeable in early German names, and chronicles first mention Peter Kromer of Liegnitz in 1381.

Early History of the Krumm family

Notables of the period with the surname Krumm were Georg Hieronymus Kromeier (d.1551), a chamberlain of the city of Breslau, who was knighted by Kaiser Maximilian I around 1500; and Marcin Kromer (1512-1589), Prince-Bishop...
Another 33 words (2 lines of text) are included under the topic Early Krumm Notables in all our PDF Extended History products and printed products wherever possible.

In the United States, the name Krumm is the 9,673rd most popular surname with an estimated 2,487 people with that name. [1]

Krumm migration to the United States +

Krumm Settlers in United States in the 18th Century

Krumm Settlers in United States in the 19th Century