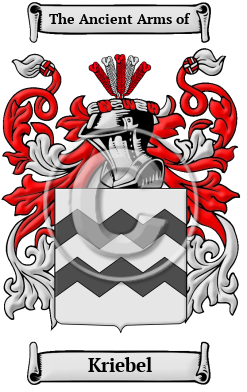 The Kriebel surname comes from the Middle High German word "krieger," meaning " warrior," or "soldier;" and as such it was an occupational name for a mercenary soldier. However, some instances of this name are no doubt derived from the Middle High German word "kriege," which means "obstinate" or "cantankerous." In this case, Kriebel would have originally been a nickname, which in turn became a hereditary surname when surnames first began to be used.

Early Origins of the Kriebel family

The surname Kriebel was first found in Silesia, where the family rose to prominence early in the mediaeval era. From the 13th century the surname was identified with the great social and economic evolution which made this territory a landmark contributor to the development of the nation. Individual bearers of this name first mentioned in ancient chronicles include Johann Criec (Chrieger) who lived around 1260.

Early History of the Kriebel family

Notables of the period with the surname Kriebel were Johan Cornelius Krieger (1683-1755), a Danish architect and landscape architect; Captain Marten Kregier (Cregier) (1617-c.1681), German settler of New Amsterdam from Borcken; and Adam Krieger (1634-1666), an organist at the Leipzig and Dresden courts, who is...
Another 44 words (3 lines of text) are included under the topic Early Kriebel Notables in all our PDF Extended History products and printed products wherever possible.

In the United States, the name Kriebel is the 15,453rd most popular surname with an estimated 2,487 people with that name. [1]

Kriebel migration to the United States +

Kriebel Settlers in United States in the 18th Century

Kriebel Settlers in United States in the 19th Century

Kriebel Settlers in United States in the 20th Century