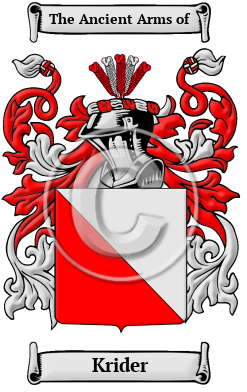 The ancient and distinguished German surname Krider is derived from "Kreidel," the name of a town near Wohlau, Silesia. Alternatively, the name may be derived from the German word "kreide," meaning "chalk." In this case, the name Krider would have been initially borne by someone who made or sold chalk.

Early Origins of the Krider family

The surname Krider was first found in Silesia, where the name is thought to have emerged. It was a common practice of the time to refer to a new resident of a city by the name of his hometown; thus, it is likely that the progenitor of the name Krider was a native of Kreidel who had settled somewhere else. The earliest known bearer of the name was Crydeler, who was living in Breslau in 1400. The young Krider family played a crucial role in the early history of the region, and contributed greatly to the development of mediaeval Silesian society.

Early History of the Krider family

This web page shows only a small excerpt of our Krider research. Another 116 words (8 lines of text) covering the years 1400, 1455, 1803 and 1855 are included under the topic Early Krider History in all our PDF Extended History products and printed products wherever possible.

Spelling variations of this family name include: Kreidler, Kreider, Kreideler, Krider, Kridler and others.

More information is included under the topic Early Krider Notables in all our PDF Extended History products and printed products wherever possible.

Krider migration to the United States +

Krider Settlers in United States in the 18th Century

Krider Settlers in United States in the 19th Century