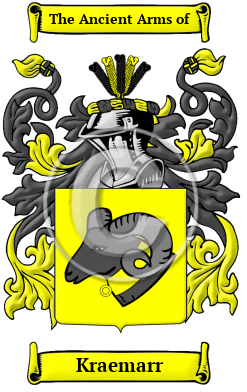 The German state of Bavaria is the ancestral home of the Kraemarr family. Hereditary surnames began to be used in Germany during the 12th century. Kraemarr is an occupational name for a shopkeeper or retail merchandiser. The name Kraemarr is derived from the German word "kram," which means "tent" or "trading post."

Early Origins of the Kraemarr family

The surname Kraemarr was first found in Bavaria, where the name came from humble beginnings but gained a significant reputation for its contribution to the emerging medieval society. They later became more prominent as many branches of the same house acquired distant estates, some in foreign countries, always elevating their social status by their great contributions to society.

Early History of the Kraemarr family

Many cultural groups lived in the German states in medieval times. Each had its own dialect and traditions, and unique variations of popular names. Low German, which is similar to contemporary Dutch, was spoken in Westphalia. German names are characterized by additions such as regional suffixes and phrases that tell something about the origin or background of its original bearer. Further contributing to the variation in German names was the fact that there were no spelling rules in medieval times: scribes recorded names according to their sound. The recorded spelling variations of Kraemarr include Kramer, Kraemer, Kremer, Krammer, Kraemmer, Kraymer, Kraymmer, Cramer, Cremer, Crammer and many more.

Prominent among members of the name Kraemarr in this period include Heinrich Kramer (c.1430-1505), German churchman and inquisitor; Ignaz Kramer, known popularly as the "Muenzmeister" (coin-master) of Kremnitz, who was ennobled in 1764 for...
Another 34 words (2 lines of text) are included under the topic Early Kraemarr Notables in all our PDF Extended History products and printed products wherever possible.

Migration of the Kraemarr family

The great European flow of migration to North America, which began in the middle of the 17th century and continued into the 20th century, was particularly attractive to those from Bavaria who wished to escape either poverty or religious persecution. For many Bavarian tenant farmers, the chance to own their own land was a major incentive. So the widespread colonization of the United States began in 1650, when many immigrants from Germany settled in pockets in Pennsylvania, Texas, New York, Illinois, and California. In Canada, German settlement centered in Ontario and the prairie provinces. Among those of this surname listed in various historical records were: Andreas Kramer and Hans Kramer, who arrived in Germantown, Pennsylvania sometime between 1683 and 1709. They were followed by Anna Catharina Kramer and Francisca Kramer who came to Philadelphia in 1725. After them, Casper Kramer arrived in Philadelphia in 1732.