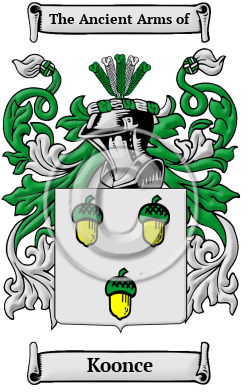 Early Origins of the Koonce family

The surname Koonce was first found in Bohemia and Silesia, where the name was an integral part of the feudal society which would shape modern European history. Individual bearers of the name first mentioned in ancient chronicles include Cuntz der Kuentzel of Kempten (West of Frankfurt) who lived around 1382, and Cuncze von Cracow who lived in Liegnitz, Silesia in 1388.

Early History of the Koonce family

This web page shows only a small excerpt of our Koonce research. Another 136 words (10 lines of text) covering the years 1701, 1767, 1792, 1839 and 1894 are included under the topic Early Koonce History in all our PDF Extended History products and printed products wherever possible.

More information is included under the topic Early Koonce Notables in all our PDF Extended History products and printed products wherever possible.

In the United States, the name Koonce is the 3,540th most popular surname with an estimated 7,461 people with that name. [1]

Koonce migration to the United States +

Koonce Settlers in United States in the 19th Century

Koonce Settlers in United States in the 20th Century