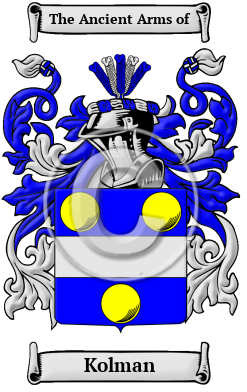 The German surname Kolman emerged in the lands that formed the modern state of Lower Saxony, which is presently bordered by the North Sea, the Hartz mountains and the Elbe and Ems rivers. Lower Saxony was previously a medieval Saxon dukedom. The name Kolman, which is a local surname, reveals that the original bearer of the name once lived, held land, or was born in this beautiful region of Lower Saxony. In the Holy Roman Empire, hereditary surnames were adopted according to fairly general rules and after the 12th century, names that were derived from localities became increasingly widespread.

Early Origins of the Kolman family

The surname Kolman was first found in Bremen, where this family made important contributions toward the development of this district from ancient times. Always prominent in social and political affairs, the family formed alliances with other families within the Feudal System and the nation. Ancient chronicles first mention Herman Kalleman of Bremen in the year 1476. The medieval German word "Kalle" referred to water, and was taken on in various forms as a surname all along the North Sea coast and in Westphalia. Thus chronicles also mention Johann von Calle of Bremen in 1313. Bremen, including the port city Bremerhaven, is Germany's smallest state. A bishop's residence since 787, Bremen became an archbishop's seat in 847. As early as 1358 Bremen held the status of a "Reichsstadt," an Imperial City that was subject only to the Emperor. Although some of its surrounding territory belonged to Sweden after 1648, as well as to the Kingdom of Hannover in 1715, Bremen entered the German Federation in 1815 as a Free City. Bremen was not built by Dukes or Kings, but by its own citizens -- bearers of the name participated in this city's rise to prominence as a trading center.

Early History of the Kolman family

This web page shows only a small excerpt of our Kolman research. Another 55 words (4 lines of text) covering the year 1476 is included under the topic Early Kolman History in all our PDF Extended History products and printed products wherever possible.

More information is included under the topic Early Kolman Notables in all our PDF Extended History products and printed products wherever possible.

Kolman migration to the United States +

Kolman Settlers in United States in the 18th Century

Kolman Settlers in United States in the 19th Century