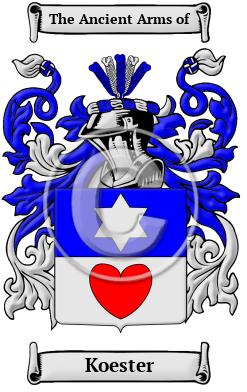 Early Origins of the Koester family

The surname Koester was first found in Mecklenburg, where the name contributed greatly to the development of an emerging nation, and would later play a large role in the tribal and national conflicts of the area. Over time, the family name branched into other houses, where their influence continued to be felt because of the important role they played in the local social and political affairs. They held a family seat at Kosteritz.

Early History of the Koester family

This web page shows only a small excerpt of our Koester research. Another 81 words (6 lines of text) covering the years 1793, 1532 and 1619 are included under the topic Early Koester History in all our PDF Extended History products and printed products wherever possible.

Spelling variations of this family name include: Koster, Kostar, Coster, Costar and others.

More information is included under the topic Early Koester Notables in all our PDF Extended History products and printed products wherever possible.

In the United States, the name Koester is the 5,155th most popular surname with an estimated 4,974 people with that name. [1]

Koester migration to the United States +

Koester Settlers in United States in the 18th Century

Koester Settlers in United States in the 19th Century

Koester Settlers in Canada in the 19th Century

Historic Events for the Koester family +

Suggested Readings for the name Koester +