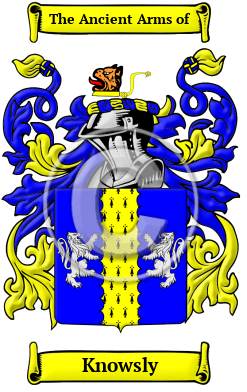 Of all the Anglo-Saxon names to come from Britain, Knowsly is one of the most ancient. The name is a result of the original family having lived in the township of Knowsley in the parish of Huyton in the county of Lancashire. In 1086, at the time of the Domesday survey Knowsley was considered a part of Cheshire due to the fact that the county of Lancashire was not created until 1182. The parish of Huyton is also known as Huyton-with-Roby in Liverpool.

Early Origins of the Knowsly family

The surname Knowsly was first found in Lancashire at Knowsley, now a large village and civil parish within the Metropolitan Borough of Knowsley in Merseyside. More commonly known as Knowsley Village, the village dates back to the Domesday Book where it was listed as Chenulueslei and literally meant "woodland clearing of a man called Cenwulf or Cynewulf," from the Old English personal name + "leah." [1] "This place was early held by a family of the local name. It became the property of the Lathom family by the marriage of Sir Robert de Lathom with Catherine, daughter and heiress of Thomas de Knowsley." [2] The oldest Thomas de Knowesley was born in the year 1200 and died in Picardie, France in 1259. His son Sir Thomas de Knowsley, born in 1245 and died in 1259 at the age of 14 had no issue.

Early History of the Knowsly family

The first dictionaries that appeared in the last few hundred years did much to standardize the English language. Before that time, spelling variations in names were a common occurrence. The language was changing, incorporating pieces of other languages, and the spelling of names changed with it. Knowsly has been spelled many different ways, including Knowsley, Knowesley, Knowsly, Knowslie, Nicely and many more.

More information is included under the topic Early Knowsly Notables in all our PDF Extended History products and printed products wherever possible.

Migration of the Knowsly family

Thousands of English families in this era began to emigrate the New World in search of land and freedom from religious and political persecution. Although the passage was expensive and the ships were dark, crowded, and unsafe, those who made the voyage safely were rewarded with opportunities unavailable to them in their homeland. Research into passenger and immigration lists has revealed some of the very first Knowslys to arrive in North America: Agnes Knowsley, aged 42, who arrived at New Zealand in 1920; Effa Allan Knowsley, aged 20, who arrived at Wellington, New Zealand in 1920; Florence Leonora Knowsley, aged 40, who arrived at Ellis Island from Ranwell, England in 1914.