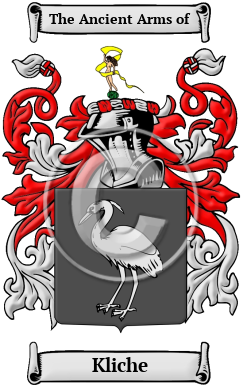 Early Origins of the Kliche family

The surname Kliche was first found in Silesia, where the family was established in 1456.

Early History of the Kliche family

This web page shows only a small excerpt of our Kliche research. Another 67 words (5 lines of text) covering the years 1729, 1799, 1826, 1841, 1854, and 1868 are included under the topic Early Kliche History in all our PDF Extended History products and printed products wherever possible.

Another 39 words (3 lines of text) are included under the topic Early Kliche Notables in all our PDF Extended History products and printed products wherever possible.

Migration of the Kliche family

Some of the first settlers of this family name or some of its variants were: Johann Klitsch, aged 28; who arrived in Quebec in 1778; Albert Kliesch, who settled in Indiana in 1868; Gottlieb Klitsch, who settled in Allegheny County, Pennsylvania in 1872.