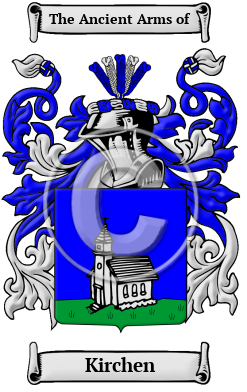 The German state of Silesia is the glorious birthplace of the distinguished surname Kirchen. In the medieval era, Germany was fragmented and inhabited by numerous Barbarian tribes, who fought amongst themselves for control of the land. The ancient dukedom of Silesia derived its name from the Germanic tribe named the Silingers, who occupied Silesia between the 2nd and the 6th centuries.

Early Origins of the Kirchen family

The surname Kirchen was first found in Silesia, where the family became noted for its many branches within the region, many houses acquiring a status and influence which rivaled that of the landed aristocracy. In their later history some branches were elevated to the ranks of nobility as they distinguished themselves through their contributions to the social, political, and economic developments of the nation. The mediaeval form of the name, "Kirchherr," meant literally "priest" or "servant of the church." The word "Kirchner" is still used in this way today in certain parts of Thuringia.

Early History of the Kirchen family

This web page shows only a small excerpt of our Kirchen research. Another 172 words (12 lines of text) covering the years 1707, 1592, 1657, 1731, 1601 and 1680 are included under the topic Early Kirchen History in all our PDF Extended History products and printed products wherever possible.

Notables of the period with the surname Kirchen were Athanasius Kircher (1601-1680), known as Father Kircher, who was a Jesuit priest famous across Europe for his great...
Another 26 words (2 lines of text) are included under the topic Early Kirchen Notables in all our PDF Extended History products and printed products wherever possible.

Migration of the Kirchen family

Some of the first settlers of this family name or some of its variants were: Georg Kirchner, who came to New York State in 1710. Johannes Kirchner arrived in Philadelphia in 1731; as did Johann Adam Kircher in 1741; Johann Philip Kercher in 1742.