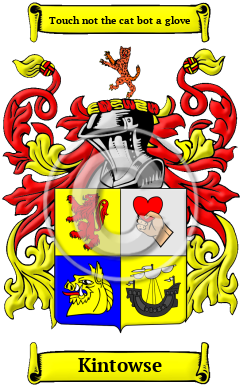 The Kintowse surname comes from the Anglicized form of the Gaelic name, Mac an Toisich. Kintowse is a patronymic surname, which belongs to the category of hereditary surnames. Many patronymic surnames were formed by adopting the given name of an ancestor of the bearer, while others came from popular religious names, and from the names of secular heroes. The surname Kintowse comes from the Gaelic name Mac an Toisich, which means "son of the chief, leader, or thane." Members of this distinguished Pictish family were originally found in Moray.

Early Origins of the Kintowse family

The surname Kintowse was first found in Moray (part of the modern region of Grampian). The Kintowse family is said to descend from Seach MacDuff, who was awarded the lands of Petty and Breachley in Inverness-shire and was appointed Constable of Inverness Castle for his support of King Malcolm IV in the suppression of a rebellion in Morayshire in 1160. A son of Seach then assumed the name "Mac-an-Toisch," and thus began the Clan MacIntosh.

Early History of the Kintowse family

During the Middle Ages, there was no basic set of rules and scribes wrote according to sound. The correct spelling of Scottish names were further compromised after many haphazard translations from Gaelic to English and back. Spelling variations of the name Kintowse include Kyntosh, Intosh, Intoch, Toshe, Tosh, McKyntosh, McKintosh, McKintoisch, McKintoch, McIntosh, McComtosh, McKintowse, McIntosh, MacKyntosh, MacIntoch, MacIntosh, McIntoch, Mackintowse, MacKintosh and many more.

More information is included under the topic Early Kintowse Notables in all our PDF Extended History products and printed products wherever possible.

Migration of the Kintowse family to Ireland

Some of the Kintowse family moved to Ireland, but this topic is not covered in this excerpt.
Another 47 words (3 lines of text) about their life in Ireland is included in all our PDF Extended History products and printed products wherever possible.

Migration of the Kintowse family

Scots left their country by the thousands to travel to Australia and North America. Desperate for freedom and an opportunity to fend for themselves, many paid huge fees and suffered under terrible conditions on long voyages. Still, for those who made the trip, freedom and opportunity awaited. In North America, many fought their old English oppressors in the American War of Independence. In recent years, Scottish heritage has been an increasingly important topic, as Clan societies and other organizations have renewed people's interest in their history. An examination of passenger and immigration lists shows many early settlers bearing the name of Kintowse: Enoch Macintosh, who came to Virginia in 1668; Henry Mackintosh, who arrived in Boston in 1702; Adam Macintosh, who settled in Georgia in 1736; John Mackintosh, who came to Georgia in 1736.