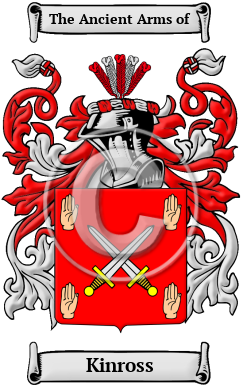 Early Origins of the Kinross family

The surname Kinross was first found in the lands of Kinross in Kinross-shire. [1] The first record of the family was Gillebertus de Kinros who attested a St. Andrews charter. c. 1170.

"Later, Henry de Kyrnos witnessed grants to the Abbey of Arnbroath, c. 1204-1211 and to the Abbey of Cambuskenneth, c. 1214. He also witnessed a confirmation charter by William the Lion, c. 1201, and is doubtless the Henricus de Kinros who attests other charters about the same period. Johannes de Kinros granted a charter to Alexander de Oggoluin (Ogilvie) of lands of Belaucht before 1232. John de Kynros who witnessed a quitclaim of the land of Drumkarauch, 1260, is probably John de Kynros who was sheriff of Kinros in 1266. Gilbert de Kynros had the lands of Cuthylgrudyn given him for life, 1263, and Thomas de Kynros was empowered in 1275 to appoint and remove attorneys at pleasure. Master Aco de Kynross rendered homage, 1291 [to King Edward I of England.]" [2]

Early History of the Kinross family

This web page shows only a small excerpt of our Kinross research. Another 124 words (9 lines of text) covering the years 1204, 1266, 1398, 1597 and 1635 are included under the topic Early Kinross History in all our PDF Extended History products and printed products wherever possible.

More information is included under the topic Early Kinross Notables in all our PDF Extended History products and printed products wherever possible.

Kinross Settlers in New Zealand in the 19th Century