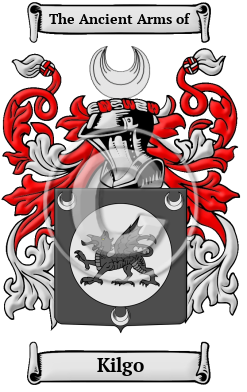 In Scottish history, few names go farther back than Kilgo, whose ancestors lived among the clans of the Pictish tribe. They lived in Kilgour, which is located near Falkland in the county of Fife. "The ancient name of a parish in Fifeshire, Scotland, so called from kill, a church, and gour, a hill—the church on the hill, or surrounded by hills." [1]

Early Origins of the Kilgo family

The surname Kilgo was first found in Fife, at Kilgour where it is "an old Scottish family, who probably derived their name from a place so called in the parish of Falkland, co. Fife. " [2] "The surname is found all over Fife and is also common in Aberdeenshire. It is also found in North Australia, and has given name to a river there." [3]

Early History of the Kilgo family

The arts of spelling and translation were yet in their infancies when surnames began, so there are an enormous number of spelling variations of the names in early Scottish records. This is a particular problem with Scottish names because of the numerous times a name might have been loosely translated to English from Gaelic and back. Kilgo has been spelled Kilgour, Kilgore and others.

Notable amongst the Clan at this time was Sir Thomas Kilgour, "who appears in 1528 as chaplain of St, Thomas in the palace of Falkland is probably the same "Sir" Thomas Kilgoure to whom several entries of...
Another 36 words (3 lines of text) are included under the topic Early Kilgo Notables in all our PDF Extended History products and printed products wherever possible.

In the United States, the name Kilgo is the 17,286th most popular surname with an estimated 2,487 people with that name. [4]

Migration of the Kilgo family

This oppression forced many Scots to leave their homelands. Most of these chose North America as their destination. Although the journey left many sick and poor, these immigrants were welcomed the hardy with great opportunity. Many of these settlers stood up for their newfound freedom in the American War of Independence. More recently, Scots abroad have recovered much of their collective heritage through highland games and other patriotic functions and groups. An examination of passenger and immigration lists has located various settlers bearing the name Kilgo: Francis Kilgore settled in Virginia in 1761; Joseph and Martha Kilgour settled with their four children settled in Barstable Massachusetts in 1822; George Kilgour arrived in San Francisco in 1850..