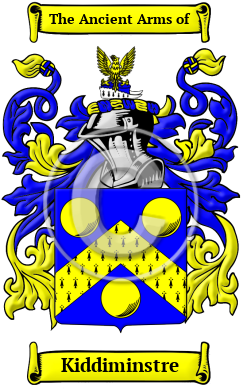 The ancient roots of the Kiddiminstre family name are in the Anglo-Saxon culture. The name Kiddiminstre comes from when the family lived in Kidderminster, a village in Worcestershire. The place-name was recorded as Chideminstre in the Domesday Book, [1] which was compiled in 1086, and as Kedeleministere in 1154. The place-name is derived from the Old English personal name Cydela, and the Old English word mynster, which meant monastery. The place-name as a whole means "monastery of a man called Cydela." The surname means "one who came from Kidderminster." [2]

Early Origins of the Kiddiminstre family

The surname Kiddiminstre was first found in Worcestershire at Kidderminster. "At the time of the Conquest this was a royal manor, and it continued so until the reign of Henry II., when it passed into the hands of various possessors, of whom Waller, the poet, was subsequently one." [3]

Early History of the Kiddiminstre family

One relatively recent invention that did much to standardize English spelling was the printing press. However, before its invention even the most literate people recorded their names according to sound rather than spelling. The spelling variations under which the name Kiddiminstre has appeared include Kittermaster, Kidderminster, Kiddermaster, Kiddiminstre, Keedomister, Kederminster, Kidiministre, Kidiminstre, Kytermyster and many more.

Distinguished members of the family include Richard Kedermyster or Kyderminstre (d. 1531?), Abbot of Winchcomb, Gloucestershire, probably a native of Worcestershire. "At the age of fifteen he was admitted into the Benedictine monastery of Winchcomb; four years later he was sent to Gloucester College, Oxford, where the monastery owned an apartment called Winchcomb Lodgings; after remaining there for three years and a half he was summoned home, and by the interest of his patron, John Twynning, the abbot of Winchcomb, was made ‘scholar or pastor’ of the monastery. On Twynning's death in 1487, he was elected lord...
Another 96 words (7 lines of text) are included under the topic Early Kiddiminstre Notables in all our PDF Extended History products and printed products wherever possible.

Migration of the Kiddiminstre family

At this time, the shores of the New World beckoned many English families that felt that the social climate in England was oppressive and lacked opportunity for change. Thousands left England at great expense in ships that were overcrowded and full of disease. A great portion of these settlers never survived the journey and even a greater number arrived sick, starving, and without a penny. The survivors, however, were often greeted with greater opportunity than they could have experienced back home. These English settlers made significant contributions to those colonies that would eventually become the United States and Canada. An examination of early immigration records and passenger ship lists revealed that people bearing the name Kiddiminstre arrived in North America very early: Hugh Kiddermaster, who arrived in Virginia in 1628; Anthony Kittermaster, who was on record in Ontario in 1871; and Albert Kittermaster, also on record in Ontario in 1871..