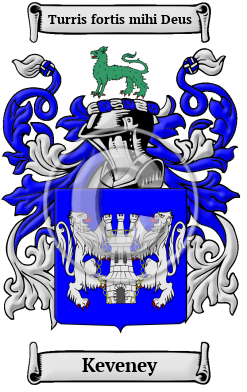 Early Origins of the Keveney family

The surname Keveney was first found in County Galway (Irish: Gaillimh) part of the province of Connacht, located on the west coast of the Island, which is the principal homeland of the sept O Geibheannaigh. The O Geibheannaigh sept belonged to the Ui Maine (Hy Many) and descended from Geibheannach, the son of a Hy Many chief slain in 971. There was also a County Fermanagh sept called Mac Geibheannaigh mentioned in the Annals of Loch Ce in 1308.

Early History of the Keveney family

This web page shows only a small excerpt of our Keveney research. Another 73 words (5 lines of text) covering the years 1590 and 1599 are included under the topic Early Keveney History in all our PDF Extended History products and printed products wherever possible.

More information is included under the topic Early Keveney Notables in all our PDF Extended History products and printed products wherever possible.

Keveney migration to the United States +

Keveney Settlers in United States in the 19th Century

Motto: Turris fortis mihi Deus
Motto Translation: God is a tower of strength to me.