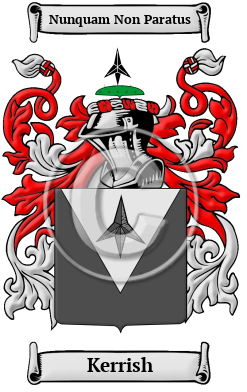 The origins of the Kerrish name lie with England's ancient Anglo-Saxon culture. It comes from when the family lived in the village of Kerridge found in the parish of Prestbury in the county of Cheshire.

Early Origins of the Kerrish family

The surname Kerrish was first found in Cheshire, in the village of Kerridge. The place name was derived from "key ridge." However, we must look to Suffolk for the earliest record of the family as John Kerrage was registered there in 1297. Two years later, the family "occurs in the records of Dunwich for 1299." [1]

Early History of the Kerrish family

Before the last few hundred years, the English language had no fast system of spelling rules. For that reason, spelling variations are commonly found in early Anglo-Saxon surnames. Over the years, many variations of the name Kerrish were recorded, including Kerridge, Kerrage, Kerrich, Kerriche, Kerysche and others.

Another 34 words (2 lines of text) are included under the topic Early Kerrish Notables in all our PDF Extended History products and printed products wherever possible.

Kerrish Settlers in New Zealand in the 19th Century