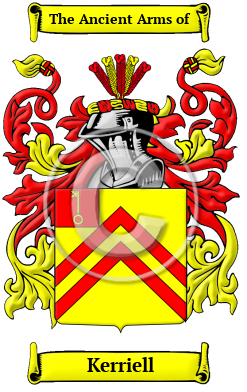 Early Origins of the Kerriell family

The surname Kerriell was first found in Roll of Battel Abbey in which "Robert, Duke of Normandy, the Conqueror's father, in order to keep in check the people of the Pays de Dol, built in the year 1030 a castle at Cazel or Cheruel upon the Cousnon, a river which then divided the provinces of Normandy and Brittany. This place gave name to a family, which became highly distinguished in succeeding generations, and of which was the Norman knight, Kiriel, who appears on the Battle Abbey Roll. Among the more celebrated personages of the name, we may mention Hue Kyriel, Admiral of the French, and Nicholas Kiriel, Admiral of the English Fleet, in the 14th century." [1]

Early History of the Kerriell family

This web page shows only a small excerpt of our Kerriell research. Another 136 words (10 lines of text) covering the years 1510, 1600, 1075 and 1306 are included under the topic Early Kerriell History in all our PDF Extended History products and printed products wherever possible.

More information is included under the topic Early Kerriell Notables in all our PDF Extended History products and printed products wherever possible.

Migration of the Kerriell family