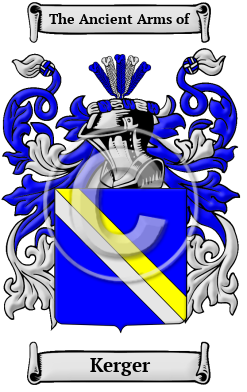 The colorful history of the German region of Silesia provides the setting for oldest origins of the Kerger family surname. The name Kerger comes from the Middle High German word "karc," meaning "cunning," or "sly." As such, the surname was most likely originally a nickname which later became a surname.

Early Origins of the Kerger family

The surname Kerger was first found in Silesia, where this family made important contributions toward the development of this district from ancient times. Always prominent in social and political affairs, the family formed alliances with other families within the Feudal System and the nation. Ancient chronicles first mention Heinczel Kergel of Prague (c.1321,) Nicolaus Karger of Olmuetz (c.1361,) and Wigund Karge of Hessen (c.1265).

Early History of the Kerger family

Another 29 words (2 lines of text) are included under the topic Early Kerger Notables in all our PDF Extended History products and printed products wherever possible.

Kerger migration to the United States +

Kerger Settlers in United States in the 18th Century

Kerger Settlers in United States in the 19th Century