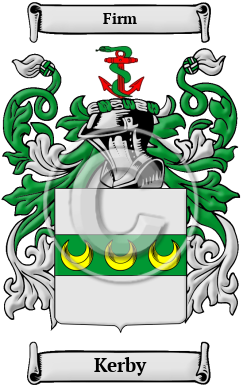 The Norman Conquest of England in 1066 added many new elements to an already vibrant culture. Among these were thousands of new names. The Kerby family lived at Kirkby in Furness. The name Kirkby means village with a church.

Early Origins of the Kerby family

The surname Kerby was first found in Lancashire. One of the first recorded references to the name was John Kirkby (died 26 March 1290,) an English ecclesiastic and statesman. "John de Kirkeby, [was] Bishop of Ely in 1286, and founder of Ely Palace, Holborn." [1] He acted as keeper of the great seal during the frequent absences of the chancellor, Robert Burnell, during the reign of Henry III. He was Lord Treasurer from January 1284 to his death. On 26 July 1286, he was elected Bishop of Ely, a post he held until his death.

Early History of the Kerby family

Endless spelling variations are a prevailing characteristic of Norman surnames. Old and Middle English lacked any definite spelling rules, and the introduction of Norman French added an unfamiliar ingredient to the English linguistic stew. French and Latin, the languages of the court, also influenced spellings. Finally, Medieval scribes generally spelled words according to how they sounded, so one person was often referred to by different spellings in different documents. The name has been spelled Kirkby, Kirby, Kerribly, Kerwick, O'Kerwick and many more.

Outstanding amongst the family at this time was Thomas Kirkby, rector of the church of St. Michael in Aughton, Lancashire in 1548 [2]; John Kirby (1690-1753), an English land surveyor and topographer, best known for his book The Suffolk Traveller; Richard Kirkby (c.1625-1681), an English politician, from Kirkby Ireleth in Lancashire. He was a Justice of the Peace and Member of Parliament for Lancaster (1661-1681). His son Colonel Roger Kirkby (c.1649-1709) was an English soldier and politician. He was Governor of...
Another 80 words (6 lines of text) are included under the topic Early Kerby Notables in all our PDF Extended History products and printed products wherever possible.

In the United States, the name Kerby is the 7,200th most popular surname with an estimated 4,974 people with that name. [3]

Migration of the Kerby family to Ireland

Some of the Kerby family moved to Ireland, but this topic is not covered in this excerpt. More information about their life in Ireland is included in all our PDF Extended History products and printed products wherever possible.

Kerby migration to the United States +

To escape the political and religious persecution within England at the time, many English families left for the various British colonies abroad. The voyage was extremely difficult, though, and the cramped, dank ships caused many to arrive in the New World diseased and starving. But for those who made it, the trip was most often worth it. Many of the families who arrived went on to make valuable contributions to the emerging nations of Canada and the United States. An inquiry into the early roots of North American families reveals a number of immigrants bearing the name Kerby or a variant listed above:

Kerby Settlers in United States in the 17th Century

Kerby Settlers in United States in the 18th Century

Kerby Settlers in United States in the 19th Century

Kerby Settlers in Canada in the 18th Century

Kerby Settlers in Canada in the 19th Century

Kerby Settlers in Australia in the 19th Century

Kerby Settlers in West Indies in the 17th Century