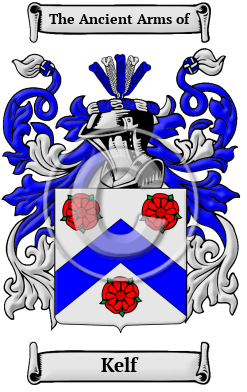 The ancestors of the Kelf family were part of an ancient Scottish tribe called the Picts. They lived in the place named Colp in Aberdeenshire.

Early Origins of the Kelf family

The surname Kelf was first found in Aberdeenshire (Gaelic: Siorrachd Obar Dheathain), a historic county, and present day Council Area of Aberdeen, located in the Grampian region of northeastern Scotland.

One of the first records of the family was Johannes Coup who was recorded there in Aberdeen in 1408. "A 'commone hande bell, with ale proffetis,' was granted to William Colp and his son, David Colp in the same town in 1503, and a payment was made in 1518 to Sir Andrew Cup, evidently a cleric." [1]

Early History of the Kelf family

This web page shows only a small excerpt of our Kelf research. Another 160 words (11 lines of text) covering the year 1408 is included under the topic Early Kelf History in all our PDF Extended History products and printed products wherever possible.

In medieval Scotland, names were more often spelled according to sound than any regular set of rules. An enormous number of spelling variations were the result. Over the years, the name Kelf has been spelled Culp, Colp, Cup, Cope and others.

More information is included under the topic Early Kelf Notables in all our PDF Extended History products and printed products wherever possible.

Kelf Settlers in Australia in the 19th Century