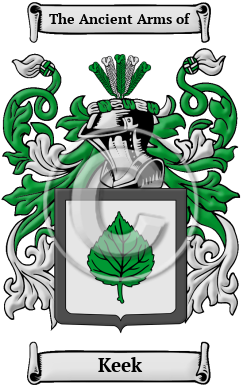 The earliest origins of the Keek surname date from the ancient Anglo-Saxon culture of Britain. Their name reveals that an early member was a person who because of their physical characteristics and physical abilities was referred to as kedge a Old English word that described someone who was brisk or active. [1]

Although one notes source has a different understanding of the origin on the name. In this case, Keek is from the "Middle English [word] keech ‘a lump of congealed fat; the fat of a slaughtered animal rolled up into a lump’, used in the 16th century for a butcher: ‘Did not goodwife Keech the Butchers wife come in then?’ (Henry IV); ‘I wonder, That such a Keech can with his very bulke Take vp the Rayes o’ th’ beneficiall Sun, And keepe it from the Earth’ (Henry VIII), where the reference is to Cardinal Wolsey, a butcher’s son. " [2]

Early Origins of the Keek family

The surname Keek was first found in Cambridgeshire and Surrey where Reginald and Hugo Keche were listed in the Curia Regis Rolls for 1206 and 1219. [2]

Early History of the Keek family

It is only in the last few hundred years that the English language has been standardized. For that reason, early Anglo-Saxon surnames like Keek are characterized by many spelling variations. As the English language changed and incorporated elements of other European languages, even literate people changed the spelling of their names. The variations of the name Keek include: Ketch, Keech, Keach, Kedge and others.

Distinguished members of the family include Hugo Ketch of Cheshire; John (Jack) Ketch (died 1686), one of King Charles II's executioners, who became quite infamous for the terrible suffering of his victims; his name has lived on as slang for the gallows or even for death itself. Benjamin Keach (1640-1704)...
Another 48 words (3 lines of text) are included under the topic Early Keek Notables in all our PDF Extended History products and printed products wherever possible.

Migration of the Keek family

Many English families tired of political and religious strife left Britain for the new colonies in North America. Although the trip itself offered no relief - conditions on the ships were extremely cramped, and many travelers arrived diseased, starving, and destitute - these immigrants believed the opportunities that awaited them were worth the risks. Once in the colonies, many of the families did indeed prosper and, in turn, made significant contributions to the culture and economies of the growing colonies. An inquiry into the early roots of North American families has revealed a number of immigrants bearing the name Keek or a variant listed above: Margaret and Susan Ketch, who settled in New England in 1665 with their husbands; as well as John Ketch, who arrived in Philadelphia in 1741.