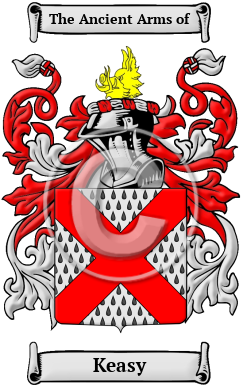 The name Keasy first arose amongst the Anglo-Saxon tribes of Britain. It is derived from their having lived in Kersey, a parish in Suffolk. The place-name Kersey is derived from the Old English elements cærse, which means watercress, and eg, the old English word for island. It was recorded as Cæresige c. 995, and as Careseia in the Domesday Book, [1] compiled in 1086. The name as a total means "island where the watercress grows." The surname is derived from the place-name. In the early Middle Ages, local surnames were often proceeded by the word de or atte, which meant of and at, respectively. This custom was brought to England by the Normans after they conquered the Saxon Nobility at the Battle of Hastings in 1066. The surname as a whole, de Keasy, meant "of Kersey." Eventually, the use of de and atte declined, as Old English and Old Norman fused into Old English over the next few centuries.

Early Origins of the Keasy family

The surname Keasy was first found in Suffolk at Kersey, a village and a civil parish in the Babergh district which today includes the hamlets of Kersey Tye, Kersey Upland, Wicker Street Green, and William's Green. Originally part of the hundred of Cosford, it comprised about 1,465 acres and an Augustine priory was founded there at an early period dedicated to St. Mary and St. Anthony; at the Dissolution it was granted to King's College, Cambridge. [2] Kersey is the name of a coarse woollen cloth having derived its name from kersey yarn and ultimately from the village of Kersey.

Early History of the Keasy family

This web page shows only a small excerpt of our Keasy research. Another 67 words (5 lines of text) covering the years 1272, 1616, 1690 and 1720 are included under the topic Early Keasy History in all our PDF Extended History products and printed products wherever possible.

One relatively recent invention that did much to standardize English spelling was the printing press. However, before its invention even the most literate people recorded their names according to sound rather than spelling. The spelling variations under which the name Keasy has appeared include Kersey, Kercey, Keresey, Kearsey and others.

Another 32 words (2 lines of text) are included under the topic Early Keasy Notables in all our PDF Extended History products and printed products wherever possible.

Migration of the Keasy family

At this time, the shores of the New World beckoned many English families that felt that the social climate in England was oppressive and lacked opportunity for change. Thousands left England at great expense in ships that were overcrowded and full of disease. A great portion of these settlers never survived the journey and even a greater number arrived sick, starving, and without a penny. The survivors, however, were often greeted with greater opportunity than they could have experienced back home. These English settlers made significant contributions to those colonies that would eventually become the United States and Canada. An examination of early immigration records and passenger ship lists revealed that people bearing the name Keasy arrived in North America very early: Thomas Kersey, who came to the Somers Islands in 1673; John Kersey, who settled in Philadelphia in 1731; as well as Thomas Kersey, who settled in Maryland in 1775..