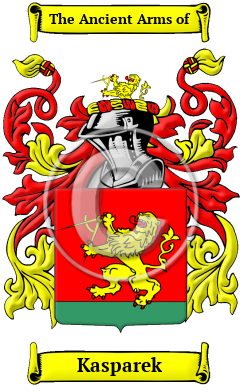 The Polish Kasparek surname is of patronymic origin, it is a surname that was created from the first name of the father of the original bearer of the name. The Christian name Kaspar is of Old Germanic origin, deriving from the Persian word for "Treasurer." The name became popular as it had been ascribed by popular tradition in Europe to one of the three Magi.

Early Origins of the Kasparek family

The surname Kasparek was first found in Polesie, the largest province of Poland. It is inhabited by Ruthenians, called Polesians, of Ukrainian descent. The main towns are those of Brest Litovsk, Pinsk, Kobryn, Kamenets, Litovsk, and Luninets. It was in this province that the renowned Radziwills and Sapiehas held their vast estates. Wolczyn was the seat of the Czartoryski family. The earliest recorded instance of this surname found was of Johann Caspar listed in the in the "Regesta Episcoporum Constantiensium" in 1441 as being a chaplain at Schaffhausen, Germany. The Kasparek surname became noted for its many branches in the region, some were elevated to the ranks of nobility as they grew in power and influence.

Early History of the Kasparek family

This web page shows only a small excerpt of our Kasparek research. Another 108 words (8 lines of text) covering the years 1571, 1772, 1856, and 1859 are included under the topic Early Kasparek History in all our PDF Extended History products and printed products wherever possible.

More information is included under the topic Early Kasparek Notables in all our PDF Extended History products and printed products wherever possible.

Kasparek migration to the United States +

Kasparek Settlers in United States in the 19th Century