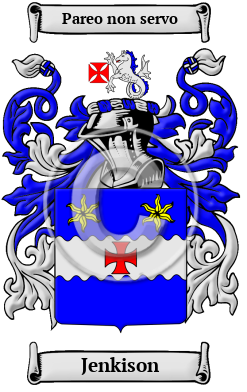 The Anglo-Saxon name Jenkison comes from the baptismal name for the son of Jenkin, which was a diminutive of John. [1]

Baptismal names are a type of patronymic surname, which come from religious and vernacular given name traditions. In this case, the surname Jenkison derived from the popular biblical name John, which comes from John the Apostle.

Early Origins of the Jenkison family

The surname Jenkison was first found in Yorkshire where the Yorkshire Poll Tax Rolls of 1379 include Robert (Robertus) Jonkinson and Johannes Jonkynson as holding lands there at that time. (Bardlsey)

Early History of the Jenkison family

One relatively recent invention that did much to standardize English spelling was the printing press. However, before its invention even the most literate people recorded their names according to sound rather than spelling. The spelling variations under which the name Jenkison has appeared include Jenkinson, Jankinson and others.

Distinguished members of the family include Anthony Jenkinson (d. 1611), English explorer, merchant, sea-captain, and traveller. When still a youth he was sent, in 1546, into the Levant as training for a mercantile career. " In 1553 he was at Aleppo, and wrote an account of the entry of Solyman the Great on 4 Nov. From Solyman he obtained a ‘safe-conduct or privilege,’ permitting him to trade in Turkish ports, ‘with his ship or ships or other vessels,’ without hindrance, and free of any extraordinary custom or toll. In 1555 he was admitted a member of the Mercers' Company, and in...
Another 139 words (10 lines of text) are included under the topic Early Jenkison Notables in all our PDF Extended History products and printed products wherever possible.

Migration of the Jenkison family

At this time, the shores of the New World beckoned many English families that felt that the social climate in England was oppressive and lacked opportunity for change. Thousands left England at great expense in ships that were overcrowded and full of disease. A great portion of these settlers never survived the journey and even a greater number arrived sick, starving, and without a penny. The survivors, however, were often greeted with greater opportunity than they could have experienced back home. These English settlers made significant contributions to those colonies that would eventually become the United States and Canada. An examination of early immigration records and passenger ship lists revealed that people bearing the name Jenkison arrived in North America very early: Frances and Oliver Jenkinson settled in Virginia in 1623 with Robert; B.A. Jessie, John, Joseph, Mathew, Robert, Thomas and William Jenkinson all arrived in Philadelphia between 1840 and 1860..