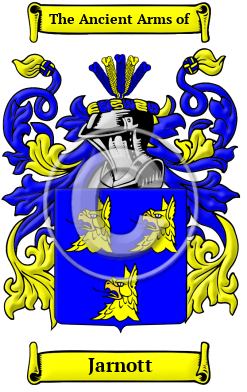 The name Jarnott reached English shores for the first time with the ancestors of the Jarnott family as they migrated following the Norman Conquest in 1066. Jarnott is a name for a person who grew or sold pomegranates. This metonymic name, which is a type of name that refers to the principal object associated with the activity of the original bearer, is derived from the old French words pome, which meant fruit or apple, and grenate, which meant full of seeds. The name of the precious stone is derived from the same source. The name Jarnott is also a metonymic occupational name for a maker or fitter of hinges, derived from the Old French word carne, which means hinge. The name Jarnott was brought to England after the Norman Conquest of 1066 and it spread into the county of Lancashire.

Early Origins of the Jarnott family

The surname Jarnott was first found in Lancashire at Leck, a township and chapelry, in the parish of Tunstall, union of Lancaster, hundred of Lonsdale south of the Sands. "This township belonged to the Gernets, of Halton, in the reign of John." [1]

Early History of the Jarnott family

This web page shows only a small excerpt of our Jarnott research. Another 67 words (5 lines of text) covering the years 1555, 1606, 1605, 1575 and 1608 are included under the topic Early Jarnott History in all our PDF Extended History products and printed products wherever possible.

Multitudes of spelling variations are a hallmark of Anglo Norman names. Most of these names evolved in the 11th and 12th century, in the time after the Normans introduced their own Norman French language into a country where Old and Middle English had no spelling rules and the languages of the court were French and Latin. To make matters worse, medieval scribes spelled words according to sound, so names frequently appeared differently in the various documents in which they were recorded. The name was spelled Garnett, Garnet, Garnette, Gernet, Gernett and others.

Outstanding amongst the family at this time was Sir Roger Gernett of Lancashire; Henry Garnet (1555-1606), sometimes Henry Garnett, an English Jesuit priest executed for his complicity in the Gunpowder Plot of 1605. He was born at Heanor, Derbyshire, the son of Brian Garnett and his wife, Alice Jay. "Father John Gerard states that his parents were well esteemed, and well able to maintain their family...
Another 66 words (5 lines of text) are included under the topic Early Jarnott Notables in all our PDF Extended History products and printed products wherever possible.

Migration of the Jarnott family

Because of this political and religious unrest within English society, many people decided to immigrate to the colonies. Families left for Ireland, North America, and Australia in enormous numbers, traveling at high cost in extremely inhospitable conditions. The New World in particular was a desirable destination, but the long voyage caused many to arrive sick and starving. Those who made it, though, were welcomed by opportunities far greater than they had known at home in England. Many of these families went on to make important contributions to the emerging nations of Canada and the United States. Analysis of immigration records indicates that some of the first North American immigrants bore the name Jarnott or a variant listed above: James Garnet who settled in Maryland in 1685; Elizabeth Garnet settled in Virginia in 1623; Judith Garnett settled in Massachusetts in 1634; Susan and Thomas Garnett settled in Virginia in 1623.